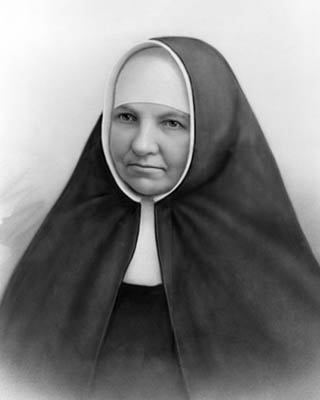 Katharina Kasper was born in 1820 in Dernbach Germany. She was the third child of four children of Henry and Catherine Kasper, poor peasants with a deep religious faith.

During her 6-14 years of age Katharina attended the village school. However she was a sickly child and missed school often. Her formal education amounted to about two years.

When Katharina was 21 her father died. Katharina became responsible for her mother. She began working as a hired hand for 10 cents a day to support her mother and herself.

Already as a child Katharina was sensitive to the needs of the poor in her village. As a young woman she began to help the poor and the abandoned and visited the sick. Her works of charity attracted other women of the village and with the encouragement of her spiritual director, she formed an Association of Charity.

Katharina’s love for Mary, the mother of God was nurtured by her frequent visits to a small chapel dedicated to Our Lady of the Heilborn. Mary’s faith response to what God asked motivated Katharina to respond in courage to the promptings of the Holy Spirit within her.

The promptings of the Spirit, a “voice within” as Katharina named it encouraged her to build a little house. With the permission of the bishop, about $1.50 in her pocket and much faith she began the construction in 1847. After her mother’s death in 1848 she was able to move into her little house and devote more time to her works of charity.

In time four young women joined her and in 1851 this small group became a religious congregation. Katharina chose the name Poor Handmaids of Jesus Christ. She looked to Mary as the first handmaid as her model. Like Mary she listened attentively to the Spirit and responded with courage to the will of God.

Katharina, known in religious life as Mother Mary, died on February 2, 1898. Because of her radical following of Christ and her works of love, the Church beatified her as Blessed Mary Catherine Kasper on April 16, 1978. She was canonized as Saint Katharina Kasper on October 14, 2018, by Pope Francis. Her feast day is February 1.